Anima-humans is the twelfth episode of Season 2 of The New Looney Tunes Show, starring Pinky, the Brain and Walter Wolf.

The Brain creates a machine that can turn any animal into a human, and plans to use it on himself, so that he has an easier chance of taking over the world. Unfortunately, Walter Wolf steals it and, thinking it is a weapon to killing Slappy, starts turning many of the Looney Tunes animals into humans, except Pinky, the Brain, Slappy, Rita, Runt, Tweety, Aoogah, the rest of the mice, Henery, the Road Runner, Gogo, Little Beeper, Marc Anthony and Pussyfoot. It's up to them to stop Walter. 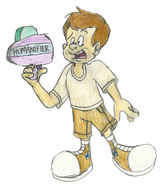 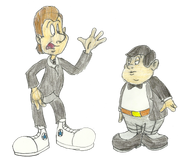 Babbit and Catstello.
Community content is available under CC-BY-SA unless otherwise noted.
Advertisement