Lola Bunny is a cartoon character from Warner Bros. Studios. She is an anthropomorphic rabbit and has been established as having a romantic involvement with Bugs Bunny, as well as being his main love interest and girlfriend and wife. She has tan fur, blond bangs, and wears a purple rubber band on both ears like a ponytail. She has aqua colored eyes, and is 3'2" tall. Lola is seen to have excellent basketball skills that got her on the Tune Squad. Lola is potrayed as a Tomboyish, Hawkshaw, Femme Fatale who despites having a no nonsense attitudes, also possesing an altruistic and benevolent nature. She loves swimming and playing video games:Nintendo,Sony PlayStation,Microsoft Xbox,iOS,best friends:Daffy,Sylvester,Tweety,Tina. Boyfriend:Bugs,Eating and Drinking.

Lola is the mother to Lilly, Buzz, Timothy and baby Laura

She is the godmother of Lyndsey's daughter, Lucy.

Lola will appear as a guest character in the 2017 cartoon crossover. She is Lyndsey Longmoore and Violet Parr's best friend.

Lola appears as a baby, looked after by Foghorn Leghorn.

Lola (as her Space Jam self) appeared as a main character and often appeared in her own cartoons (mostly with Bugs).

Lola (as her Space Jam self) is a main character in the TV show Bugs Bunny's House of Toons in which she and Bugs are the owners of the clubhouse.

Lola Bunny has appeared in two Collegehumour episodes. With one where Swackhammer wants the Looney tunes again and seek help from LeBron James, but Lebron claims that Tune squad have no talent. Another, is with Kim Jong Un and Dennis Rodman fight of an evil man along with four human like aliens, they need a best team player and recruit Lola for the team. When the evil man turns into a slug like monster, Lola helps save the day by using her affectionate to destry the monster.

Lola has a prominent role in these, usually starring as Bugs' girlfriend and wife but that's not until later 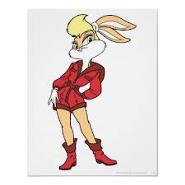 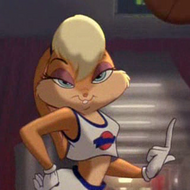 Add a photo to this gallery
Retrieved from "https://looneytunesfanon.fandom.com/wiki/Lola_Bunny?oldid=20990"
Community content is available under CC-BY-SA unless otherwise noted.