The Road Runner is the world's fastest bird alive and has been created by known animator Chuck Jones. He is a Greater Roadrunner who runs from the ravenous Wile E. Coyote. He says "Beep Beep!" just like a car, and was recorded by Paul Julian, although it sounds like "Meep Meep!"

Road Runner is one of the minor characters in Bugs Bunny's House of Toons. He also has some major appearances in some episodes. He is often shown in the series getting chased by Wile E. Coyote or annoying him. He was also shown to help out Bugs Bunny and the other Looney Tunes in some episodes.

He also appears as a main character in New Looney Tunes and usually appears with Wile E. Coyote in the episodes.

In The Looney Tunes Show (2006-2011) he was rarley paired with Wile E. Coyote. In season 1, he was shown to have love for Tina Russo. However in season 2, her love went towards Barnyard Dawg.

According to Chuck Jones, there are rules to these shorts: 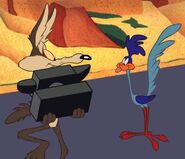 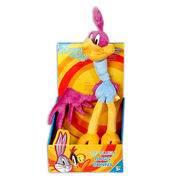 roadrunner in coyote gets the boot

Add a photo to this gallery
Retrieved from "https://looneytunesfanon.fandom.com/wiki/Road_Runner?oldid=19822"
Community content is available under CC-BY-SA unless otherwise noted.